It sucks to have it cost so much but I will tell you why it is cheaper than your sanity.
UPDATE at the bottom

My Story of Regret 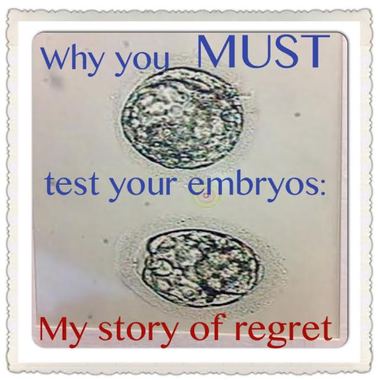 I say "MUST" because I firmly believe that you "MUST", "NEED TO", and "BETTER" genetically test your embryos before transferring because I didn't.

It took 2.5 years to get pregnant and I lost that little girl at 8 weeks, 2 days..even after seeing the heartbeat at 7 weeks. Testing the fetal tissue from the D&C showed she had Monosomy X (Turner's Syndrome). Throughout several more years of trying and getting multiple hip surgeries, we tried 4 rounds of Clomid and then 4 double IUI cycles with injectables.

After 5 years of infertility, we were at the IVF doorstep.

We never thought we wouldn't get to the point where we would need the most expensive artificial reproductive technology: I don't think any of us do. We were in denial that these IUI's or injectables would work...or perhaps we would get lucky again on our own.

Our first loss was a fluke...that is how it was termed by my OB-GYN and local RE. Then my IVF RE said the same thing.

Bad luck...that's all it truly was.

PGD or PGS (Preimplantation Diagnosis and Screening) was not recommended to us by our IVF RE because of our background. I ovulated every month like clockwork, sperm was fine, and we had gotten tested a million times and each time had shown we had nothing wrong.

Validating the extra $6,500 to spend on PGS/PGD was not in our cards we thought: we can do this without that extra cost.

"Unexplained Infertility" was where we fell: as a third of all us infertiles are in this boat.

Of those 8, 4 developed into perfect looking embryos by day 5. They picked 1 and we froze 3. 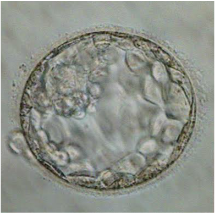 My blastocyst from March. Looks normal right?
Oh how happy I was when I found out I was pregnant on April 4th, 2014.  My husband said he knew it was going to work the first time: we had paid $22,000 for a 6 cycle money back guarantee...of course, we'd be paying more for 1 cycle because that is the risk you take with the program.

At the first ultrasound everything looked fine. I had a SCH (subchorionic hemorrhage), but it was common and nothing to worry about. I didn't have any spotting from it luckily.

I had that little embryo inside of me until April 26th: the day of my D&C.  2 days previously at my 7 weeks, 2 day ultrasound, there was no fetal pole.

The baby hadn't developed its heart.

And I, in turn, had gotten my heart destroyed again.

I was angered, depressed, hopeless, and a million other emotions.

It seemed unfair and it was---another D&C and the genetic testing of the fetal tissue concluded that it was a Trisomy 16: the most common fatal trisomy. It was another girl. It is random and not inherited. It is the most common miscarriage that occurs in boys and girls and is ALWAYS fatal.

It was something I couldn't have foreseen and again, it was a fluke. A fucking chromosomal fluke.

My IVF RE said the odds of the other 3 embryos being abnormal were rare: we took it as we had 3 normal ones left.

After my body and mind recovered, we planned for a frozen cycle in July.

Torn by choosing 1 versus 2 to transfer, I went with 2. 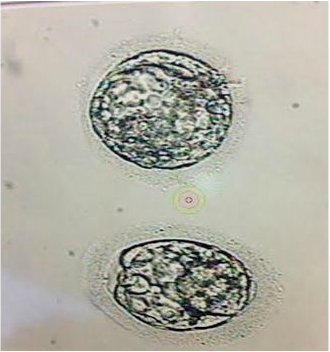 2 great looking embryos? check. Normal? Uh oh
On July 31st, I found out I was pregnant for the 3rd time. I was apprehensive and worried, but elated.

I quickly remembered that although I am lucky to be pregnant, shit could fall apart again like last time.

I tried to be positive...since those last 2 miscarriages were flukes, it surely couldn't happen again I kept telling myself.

I fell into that cycle were I was downloading the pregnancy apps. I added more to my secret pregnancy Pinterest boards.

My due dates loomed over me. I hated April, August, and December. First time it was April 7th. Second time was December 9th. This third time was April 5: Easter Sunday.

How cute to have a baby on Easter Sunday!

Oh how naive I was.

On August 8th, I had my first ultrasound that showed 1 baby from the 2 embryos were transferred. I was happy for one because I didn't really want twins even though I would gladly take them if that were the case.

The ultrasound also showed another SCH. I was told that is it very common and not a miscarriage predictor. If I were to bleed, it was most likely from that. Other than that, everything looked fine.

I went home happy, but worried.

On August 10th, I started spotting. And by August 11th, I had full blown period with the most horrific cramping in my life. I was down on the floor crying until about 5:30 p.m. when I passed a big clot.

I felt better physically after that clot, but I knew that this could not be the SCH. I was 6 weeks, 1 day. I continued to spot all week.

I must've passed that SCH....it must be my body letting it go. I tried to be positive.

I made an appointment to see my RE because I wanted to hear the heartbeat and I purposefully waited until that was possible to see at the appointment. That's all that mattered to me.

Of course, as you can figure out, I never did.  The ultrasound showed that the baby was gone. My uterus just had a clot left where the baby had died. I was devastated.

"Why the fuck is this happening to me!" I screamed while still having no pants on the ultrasound table. I cried, I swore, I screamed and the staff just let me.

I was stoic and remained that way in the RE's private office until he could talk to me. You see, I had a 4 hour car ride home from my IVF RE's office.

I wanted to leave, but he wanted to talk and I needed more time to let my Ativan sink it. I felt better physically after that.

He said this was another fluke. When spontaneous, natural miscarriages happen it is normally because the embryo was fatally abnormal. He couldn't do a D&C: I just had to bleed out all the left over tissue. This was much more difficult than the previous 2 because I was able to get a D&C two days after they found the baby had died.

All our recurrent pregnancy loss testing and dna karaotypes came up normal. We had no clotting disorders, auto immune issues, or anything that contributes to pregnancy loss. My uterus is normal.

It's the embryos that are bad.   Fucking bad luck he'd say...again.

I had 1 frozen embryo left, but I didn't want to touch it. In the program I'm in for money back guarantee, it is stated that you must use all your frozen before a fresh unless other circumstances come up.

My IVF RE said this circumstance would be an exception.  Out of 4 embryos, no one could have predicted that 75% of them were abnormal. And I didn't know until it was too late.

You see, I tell you this story because I live with regret EVERY DAY. My therapist says that I cannot say for sure that I would've avoided 2 miscarriages if I did PGD/PGS. But I know that I could of. I just fucking know it.

We are doing PGS this time with the fresh and frozen combo cycle.  I know that I can get the abnormal separate from the normal embryos.  PGS is not a guarantee: it cannot detect fatal and nonfatal dna structures like mosaicism, neurological and heart disorders, and birth defects.  You have to think about chromosomes like putting together a car: you need an engine, wheels, steering well, seats, etc. Sometimes extra parts in cars wouldn't affect they way it drives like an extra seatbelt. However, if your car is missing a wheel, its simply is not going to work.

I had a good friend transfer a normal embryo only to have to terminate her pregnancy at 16 weeks because during an ultrasound, they found out her son had limb body wall complex. He had a heart beat, but was destined to not live. Absolutely horrifying. PGS is the highest level of testing possible: the most you can try for your healthy baby, so please keep that in mind.

In my mind, if we would've done first IVF cycle, I would've avoided the pain, sorrow, grief, anger, and multitude of other emotions that I have learned to experience again and again.

In hindsight, I would've paid $30,000 or more to have them tested if that is what it cost. For what it costs emotionally and physically: well you cannot put a price on that.

If you are doing IVF, please, please test your embryos. Yes, I know it costs a shit ton more money, but let me tell you, that it is worth it. Even if your RE says no, you need to do it.

As I start my new fresh/frozen cycle for a transfer on December 10, 2014, I am worried we won't have any normal embryos. At age 32, I am considered "middle age" and the embryologist was quick to tell me that 95% of all abnormalities are due the egg. For my age as well, 56% of embryos are abnormal...fertile or infertile. Scary shit, but true.

I hope we can just get one. Please, just one.

I've battled ovarian cysts, 4 hip surgeries include bilateral hip replacements at age 30, a MRSA infection, and now 3 miscarriages due to flukes. Six years of this pain.

My heart is still broken and I just don't want this to happen to you. 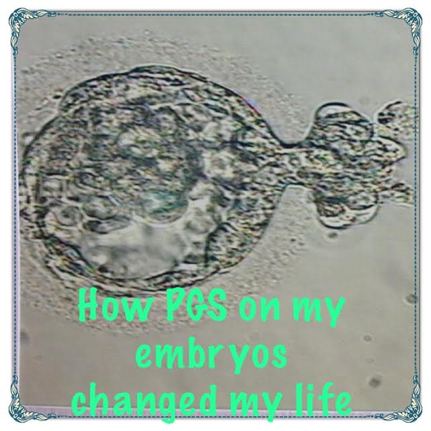 ​My November fresh cycle got 4 embryos. Add in that previous March cycle's last embryo for a total of 5 that were sent for PGS testing. The testing showed that ALL but 1 were abnormal. Pretty fucking crazy that there was only one---but I will take it!

The little hatching embryo is rated AA and was my only normal one. Look how beautiful it is!

Check out my blog post here on this page November 2014 and here December 2014 where I explain this more. Knowing that I most likely have abnormal eggs or they do not replicate dna properly when combined with sperm, I will no longer pursue having any more children after giving birth to one child. If I were to get pregnant again without IVF, I would most likely miscarry, have a stillborn, or a child with a severe disability that impairs their living. I cannot emotionally and financially afford to do any more ART treatments either.

I am not stupid and do realize that this might not be my last run with IVF...a baby that is alive and healthy is my goal. PGS testing has given us the best chance for that to happen. I do know that other things can go wrong...as they can with any other pregnancy that is not A.R.T. related. My heart aches for those like my friends who've had stillborns from umbilical strangulations and other random accidents not related to genes. It is beyond atrocious how bad things happen to very, very good people.

I do know for sure that we are done with having kids after having one baby that is alive and well. This decision of PGS and  has given me my present and future. Having answers to why I'm infertile after 6 long years of not knowing what was going on has truly given me peace.
November 2014
Powered by