When an Infertile has to Plan a Baby Shower 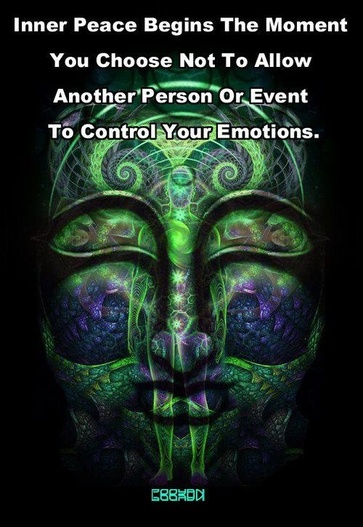 My older sister is having her first baby around Thanksgiving.

I offered to plan the baby shower. Yes, I must be crazy.

I'm doing very well with it. I like to be in control. (Which is part of why infertility has driven me nuts). I must be living vicariously through my sister.

Don't get me wrong...I hate baby showers. I just can't go to them and sit there and be fake. I feel with planning and 'hosting' this one, I can be in charge and basically be on. I liked planning her bridal shower.

Let me get it clear that obviously no one put a gun to my head and said I HAD to plan this shower. I really wanted to do it. I knew I could do a good job.

Besides, my mom didn't even know you could get a large pack of white onesies online. I'm like "MOM! Wait until you go on Etsy!" These silly baby boomers and technology! lol

I'm obsessed with going on Etsy and looking at baby shower things. Like I go on Etsy every night. The shower will be on September 21st and right now, it's August 4th. I gotta get those invites ordered!

My sister is really smart and knows not to complain around me. She was very worried to tell me that she was pregnant and I felt badly. I know I'm bitter, but it's soooo hard not to be.

Anyways, my sister said she's having some serious heartburn and keeps saying she's either having a girl or monkey!

So, the theme of the shower is MONKEY!

Check out this cute pin button I ordered.
JerriBlossoms is the seller of this.  It was only $9.95 plus $3.00 shipping.  Sweet! 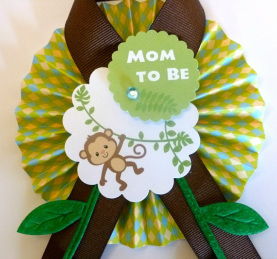 Click on the photo to be directed to the listing on Etsy. 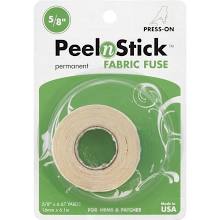 I was pretty much against doing any puffy painting or something like that because I'm not artsy enough to make anything that looked somewhat normal. Like if I made a cat with puffy paint, it would look demented.

So...I was browsing online and came across this brilliant idea online. You use fabric designs or cutouts and then just put on sticky backed fabric fusion tape. No iron! No mess! Instantly dried! You put them into the dryer afterwords to seal the tape. It's called Peel N Stick Fabric Fuse.

Check out the site here: Onesie decorating that doesn't suck. Click on the hyperlink to go to this site.

I plan on buying some cute fabric or even those quilting squares and cutting out a few shapes and stuff for people to just pick. I want to make them cute but easy for others to design and create. 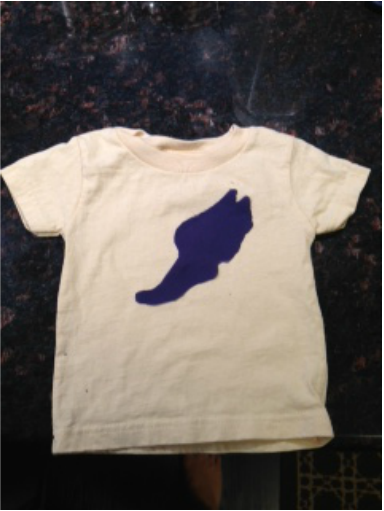 Since I did track in college and coach, I did this example! The sides got frayed, but it does add the 'homemade feel' like the website said!

I got this idea from a YouTube video from Pinterest. The ones in the video by SillyChely look a lot better than mine, but these are very easy to make and cost under $10! Don't mind my husband's legs and feet in the pics. He was laying on the couch too.

Here's the link to the video: How to make a Bassinet Diaper Cake

I thought that we could use regular diaper cakes as centerpieces too. I didn't find any particular video to make them. But once again, they were very easy to do.

I made this from another YouTube video. It cost a little bit more than the other ones, but overall, I really liked making this. The hardest part for me, was make sure the wheels had the holes on the inside to thread through the blankets.

Here is the video: How to make a Boy's Motorcycle Diaper Cake. Thom is amazing with her crafts and diaper cakes!

Other things I bought:

I plan on adding these monkeys to the diaper centerpice cakes. It was from Etsy. The seller is Crafting Crew. It is called set of 8 Cricut Monkey Die Cuts. I ordered 2 sets. 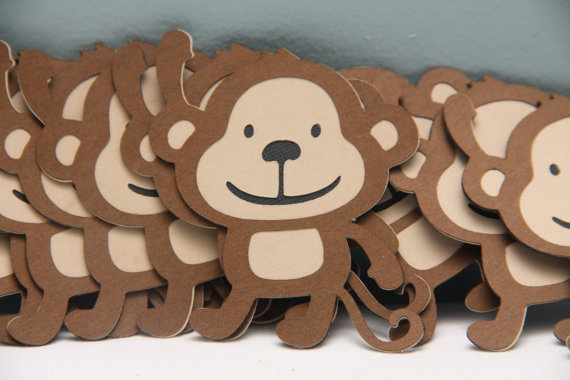 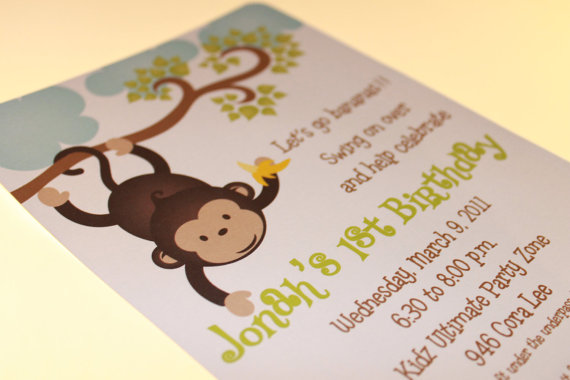 The invites I used and made them into shower ones. They are from Paper Monkey Company on Etsy. They cost $1 each. I also got Thank You cards too.

I bought some dark brown with blue spots ribbon and used the Cricut Monkeys to make a banner. I really liked the ones on Etsy, but didn't want to spend over $20 for one. This was very cheap and easy! I used coasters to make the circles from cardstock. I have a font CD called 50 School Fonts that I definitely recommend if you are a teacher. The font here is called "Dotty". 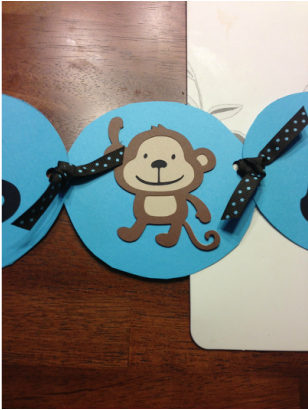 Pics from the shower!