What to say when someone loses a child

Considered the #1 most traumatic life event, losing a child is more common than you think. 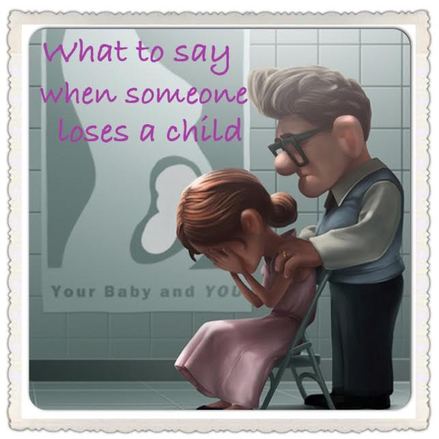 Since recently losing my third baby on August 18th, I've found myself becoming more surprised that some of my "friends" do not know what to say.

Don't get me wrong: I've had amazing texts, phone calls, visits, and food dropped off at my home. I've had people take me out to eat. I'm so grateful for those wonderful people in my life who take the time to help me heal.

I see all these articles on the "top 5 things not to say to parents of newborns", "stay at home moms", "moms of one child", etc. But I rarely see people posting about what to say when someone loses a child.

I understand that losing a child is a difficult thing to hear, but if you are one of the privileged few to have a friend reveal they've lost a child, then they have consider you a valued friend.

Now, the question becomes: What do YOU say to them?

First you need to know that child loss is very common.

According to the American Pregnancy Association, 10-25% of all clinically recognized pregnancies will end in miscarriage. Chemical pregnancies account for 50-75% when the pregnancy is lost shortly after implantation, resulting in bleeding around the same time she would expect her period. Thus, many women are not even aware they were pregnant.

You should also know that a woman who has had a previous miscarriage has a 25% chance of having another.

Miscarriages are those that occur before 20 weeks. Stillborns occur after that time. Both are equally difficult on the couple for the excitement of being pregnant is marred by the sudden loss and replacement of grief, anger, and despair. You lose the baby, toddler, 1st grader, preteen, college student, and grownup. You lose the future and you lose it in a matter of seconds.

We are labeled as having "recurrent pregnancy loss". Couples who've lost 3 or more babies are considered this and are in 1% of all baby loss. We are in another weird category for all this is due to our unexplained infertility. It took me 2.5 years to get pregnant, then after that loss, it took another 2 years, and then after that 6 months, and our 3rd loss. We don't get pregnant easily and must rely on A.R.T. (artificial reproductive technology).

After 5 and a half years of infertility, I have seen a lot. I have experienced a lot and I have talked to fertiles and infertiles* a lot. *Side note, the word "infertiles" does bug most people with infertility. It doesn't bug me, but if you say it with people first language like "She is living with infertility" it sounds better than "She's an infertile". Education is an important tool for you to avoid alienating your friends and family who are devastated with the loss of their child. I've become so much more sympathetic for I've experienced it and had friends as well.

I never thought I'd have 3 miscarriages. I never ever ever ever did. What I found in telling my friends and family was that most people were quick to say "I'm sorry" or "I'm here for you".

What I was surprised with was people that I've known for years not saying anything in return. I just had my heart ripped out and torn to shreds. I just told you the most traumatic event in my life occurred (again). And yet you say nothing?

Being uncomfortable or fearing saying the wrong thing, so you say nothing at all is a slap in the face to your friend or family member. What if their grandpa died? You'd most likely say "I'm sorry."

However when we are told that their child is dead, most often this occurs in a clinical setting around doctors and nurses...people who are not your friends nor family members.

And to miscarry naturally without warning? Yes, that happened to me on August 11th. Let me tell you after 10 surgeries, the pain I felt was NOTHING in comparison. I wouldn't wish that on my worst enemy.

So, yeah, your friend or family member has just had the absolute most horrible thing in the world occur and you HAVE to say something.

What you SHOULD say:

*This may seem like a weird one, but I don't eat/do anything but cry usually after a loss. This last time, I didn't eat for several days. I might've picked at food, but I was just lost in the moment. I spent most of my time sleeping and laying on the couch looking at a blank TV screen. I was literally sick to my stomach from heartache. If you bring over something, we will eat it, but we will most likely not make any attempts on our own (unless we have other kids at home & must make meals for them).
*This one I cannot emphasize enough. Most people are there for you the second you tell them, but then you are left hanging in the dust. I have had this happen multiple times. I'm not asking for you to text 24/7, but realize that the couple are not going to just "get over it" quickly and move on.

Let's be honest here: we are dying inside. We are depressed, anxious, moody (especially if we were on fertility drugs too), annoyed easily, and angry. These emotions hit us EVERY DAMN DAY.

Just imagine if someone you loved died every month. Each loss to us is a new set of grieving. We are trying the best we can to survive the daily life, but our lives have fallen apart.

We might withdraw from the world: for your life goes on...you continue to go to work, do laundry, watch tv, shop, and spend time with others.

We cannot move on until we are ready...it might take weeks, months, or years or perhaps never. Losing a baby through a chemical pregnancy might feel different than a miscarriage or than a stillborn, but the bottom line is that your future will NEVER be the same.

What NOT to say:

*Treating your friend or family member with silence is horrible. What should you expect happens if you lose a child? Would you want them to say nothing? I doubt it.
*Oh my oh my. Don't you dare be one of those people who say this. I do not believe this at all. So kids that are sexually abused happened for a reason? People being murdered or starved to death happened for a reason? Animals tortured happens for reason? I call BULLSHIT.
*Yeah, don't get me started on this. You know the drinking rule about not talking politics or religion? Yeah, same rules apply. You SHOULD NEVER assume that this person is religious or has the same ideals as you. This goes for ANYTHING let alone baby loss.
*Yesterday, I literally had a phone consultation with the company that will be genetically testing our embryos. The woman said at age 32, I was considered "middle-age". Yep. And if you are 35 or older? You have "advanced maternal age". So again, let's not bring age into this because you have no idea. Unless you are an RE (reproductive endocrinologist) don't give out medical advice from your crystal ball.
*Do you know how much money it takes to adopt? $30,000 a price you were thinking? And that's not even the most expensive price...you can definitely go much higher than that. That's not even the half of it. It takes years and years of paperwork, hoping, and wishing and you might not even get a child.
*Lucky them. They're not me. Please don't compare them to me. It does not give me hope that someone is the exception, not the rule.

Many people have had a grandparent or parent die. If you have, then you are able to connect with others that have lost as well. But if you've never experienced a baby loss personally, I know it will be difficult for you to understand and fathom the pain, stress, and grief.

I have known couples who've had stillborns after years of infertility, lost twins after years of infertility, lost 3 or more babies, and on and on. I have heard the worst stories and wonder how these strong men and women go on in their daily lives when infertility and baby loss is still considered by some a taboo subject. It is a horrible disease and paying tens of thousands of dollars for just a chance at having a live birth is what we do.

I hope by reading this you have become more aware and educated. Think of 4 people you know: one of them would most likely experience at least one loss. I hope you are prepared to be there for your friend or family member. Become educated and aware. If they cannot rely on family or friends during a traumatic time, then who can they rely on?
September 2014
Powered by