Time for a right FAO

Time for an FAO! 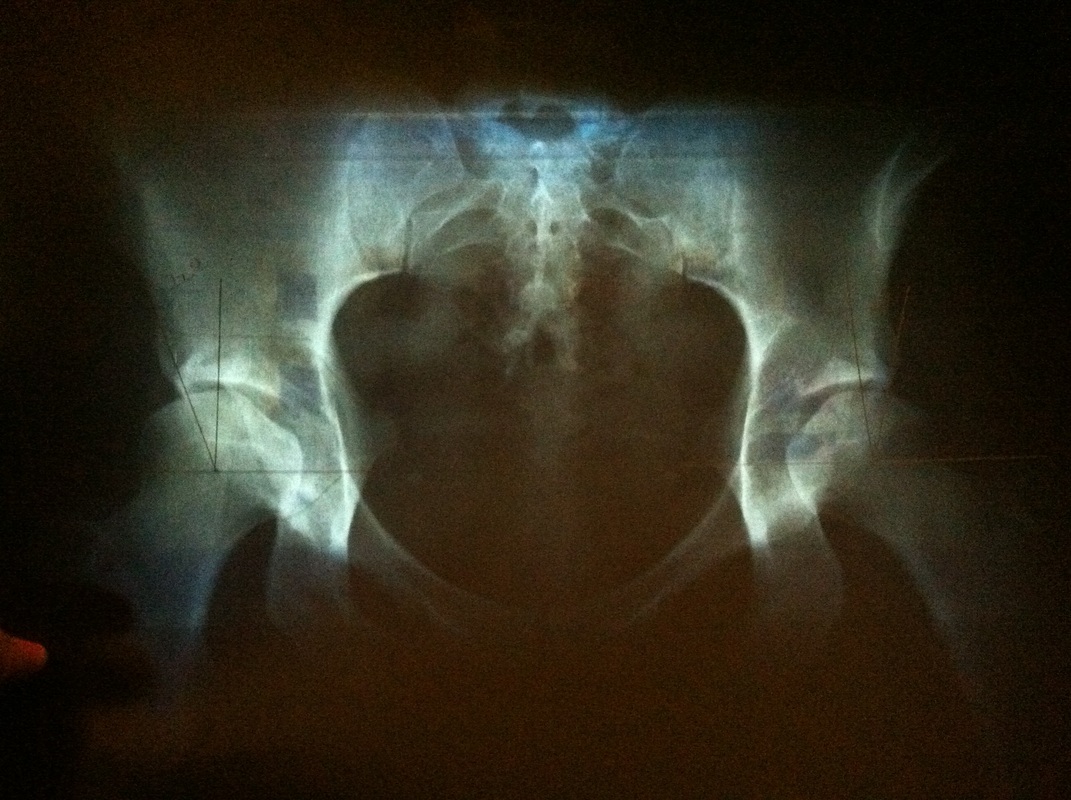 Please click on my x-ray to be transferred to the video of an FAO surgery like mine... by my doctor Dr. Javad Parvizi! He is amazing!!!!!
I began doing pre-surgery physical therapy.  I did mostly stretching for several weeks before my November 11th surgery. It was sad to realize how much strength and flexibility I lost in these last months.

My husband learned the stretches as well. He continued to stretch me at home. I was spending at least 45 minutes stretching with my therapist in the morning and about 20 minutes with my husband at night.

However, that didn't help with my arthritis. It was continuing to bother me.

When November came, I was very worried about the surgery since it was my first orthopedic one. I was happy to be in great hands and looking forward to walking correctly without limping or pain. I was looking forward to putting on shoes and pants without difficulty.

We arrived in Philly and stayed for a few days before the surgery.  I would have the FAO on Monday morning and stay over in the hospital for one night.

It's very surreal once you get called back for surgery. You spend your time getting IVs and other hoses connected. I was given a 'cocktail' of pills that included Celebrex for inflammation and pain pills.

I was going to be given a spinal. I was worried about this because I didn't know what to expect. The nurses were really friendly to me and I had 2 other people on either side of the curtain that were getting hip or knee surgeries.

When it was time for my spinal, I had to bend over really far. It didn't hurt badly. Dr. Parvizi came in next to sign my leg of the hip that was going to be operated on.

They called my husband in and my parents as well. They all came for the trip. Before I knew it I was being wheeled away through several sets of doors.

When I woke up in the recovery room, the nursing staff said I did well.  I hardly remember much.

They wheeled me into my hospital room and it was very big for a hospital room! There was a recliner, among the TV and bathroom.

The hospital food was excellent too!

My hospital PT guy came in and brought out a scale. He had to explain to me that I was only permitted 10% of my weight during the first week. Each week after, I could add 10% more.

To put 20 lbs down is really nothing! We practiced walking with crutches. I had actually spray painted them hot pink to be cute!

Walking with the crutches was tricky. I had to remember how to go up and down steps. I had to practice keeping my leg out in front of me when I sat down.

Using the restroom and showering would be daily difficult activities. I had a catheter during surgery, so that helped with me not having to go in and use the restroom.

The nursing staff continued to bring me in pain pills throughout the night. It was weird getting woken up every 2 hours though.

I had a 2-3 inch incision in the front of my right hip. Dr. Parvizi removed the bony bump on my femur, fixed the labrum, removed ossified cysts, and put in 2 non-absorbable anchor sutures.

When I was ready to leave the hospital, we stayed in the hotel for a few days before making the journey back home. I had to lay in the back of my parent's van since we figured that was the easiest way to avoid me sitting at 90 degrees.

The first days back were difficult. I kept wanting to walk without my crutches because I didn't feel much pain. I know this was a bad idea, but it was getting annoying to me to take them 10 feet to the restroom. I had my family taking care of me and they were great about getting food made for me or other stuff.

I didn't like ordering them around and I'm sure after a few days, they didn't like it either! lol I was to use the crutches with almost all non-weight bearing for 2 weeks.

I wouldn't be starting any PT again until I would get cleared by the doctor after at least 1 or 2 months. I basically had to just watch what I did and keep a low activity level.

I had a shower chair and an elevated toilet seat with handles. Those 2 things are SUPER useful for your daily life after hip surgery.

I also had to get used to sleeping on my back. I wasn't supposed to lay sideways or on my stomach. I did the same thing for my laporotomy & laproscopy too.  You just get used to laying a different way after a day or so which is weird.

After Christmas, I had to go for my 6 weeks checkup. I had made the appointment in another office in Center City Philly.  We usually stay the weekend, but we decided to just drive up the early morning before the appointment.

I slept most of the way while my husband drove. My appointment was at 9:00 and it was 8:15 and we were almost there. I was groggy from getting up at 3 a.m. and then my cell rang.

My husband said "I bet they are going to cancel your appointment."

Picking up the phone, I hear "Hi, we need to reschedule your appointment."

"Ummm...I'm sorry but the doctor isn't in. Whoever scheduled you didn't notice they're still on vacation."

"Do you see where I live? It's 6 hours away! We're almost there and somebody is going to see me!"

As we pulled into the parking garage, I was in a foul mood. The last thing I wanted to see was the staff at this office. I was so mad I had to get an appointment at this office and not our usual one in Philly.

When I walked in, I felt a chill in the air. Then I was immediately greeted before I even said my name at the counter. I think they knew I was going to come in and be in a crappy mood. They were probably worried I was going to beat them all up! haha

I immediately went to get x-rayed (you get x-rayed every office visit when you have orthopedic issues). The staff was overly friendly to me. lol Roll out that red carpet!

I was seen about one minute later into the exam room. A doctor wasn't there, but I saw a student doctor. He was very friendly and I wanted to make sure my incision was healing properly. He said everything looked good and he apologized many times.

I was able to go back to work after a total of 35 days off I believe. It was hard at first to figure out the walking, but I felt better after the surgery and wanted to get the other hip done too.
June 2011
Powered by