Immediate mental health support is crucial for the post partum journey: I had only realized a few days ago (25 months after giving birth) that I had post partum anxiety and OCD. ​ 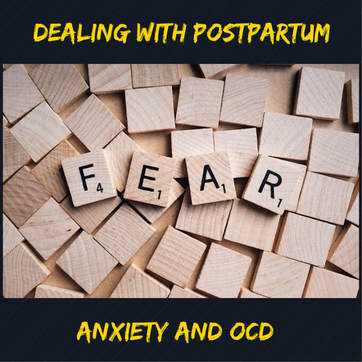 I was reading an article in People magazine where Alanis Morrisette was talking about her post partum depression and among other things, she had these "horrifyingly scary visions of her family being harmed".

I had heard of post partum depression and I knew I didn't have that for I was happy to have beaten infertility.  So, if I don't have that then I must have nothing wrong with me right?
​
But I too had the unnerving, intrusive, and severely graphic visions that came frequently and mainly when I went to sleep. I thought of my precious baby's murder, kidnapping, accidents caused by others or myself, etc.  Just horrible, horrible things beyond the "normal" worries. I googled this and found out it was called post partum OCD with intrusive thoughts. I didn't have the more common OCD symptoms, but had the thoughts often. Looking more into it I had post partum anxiety as well. Wow.....I wasn't actually psychotic.

But looking back now, I had been greatly at-risk for post partum mental health issues right from the start. Talk therapy, Prozac, and Ativan helped me get through 7 years of infertility, 3 miscarriages, 12 fertility treatments, double digit surgeries, and one high risk, hospital visit filled pregnancy.  I was never diagnosed with clinical depression or anxiety, but "mood adjustment disorder" instead and a form of PTSD. Once I gave birth, a huge weight lifted off my shoulders for he was alive and well. I was done with having anymore children and therefore must be done with any more health issues.

On day 4 after my C section, we went home and my husband left to go work in Maryland---states away. He had to work for I planned on getting half pay in exchange for a longer maternity leave. (He did come home 5 days later for a few days off.) But the night before I had been aggressively dry heaving at the hospital. Then on day 5 of no sleep, alone with a newborn, I continued to dry heave repeatedly: enough I almost lost hold of my son several times. Sometimes I would throw up a little bit. I was off pain pills and was using Zofran to combat it, so there wasn't any reason why it was occurring. My OBGYN demanded I  go to the ER for this was clearly abnormal.

I couldn't do it: leave my nursing newborn? I couldn't take him to the germy ER either! He might not take a bottle and starve while I'm gone! He's never get back on the boob if he gets a bottle! My OBGYN and mom talked some sanity into me: my mother came over while my neighbor took me to the ER. What would I have done if I had no family around?

After 3 hours of waiting getting IVs of Zofran and fluids, I was sent home with no answer as to why and now can only allude to the cause of severe anxiety/panic attacks. Luckily, the heaving and puking stopped that night.  My OBGYN would later say she was angry the nurses never told her this started in the hospital for I should've stayed longer.  My God I should've stayed another day at least in the hospital.

But like I mentioned, I was clearly at risk. Not only did I have friends who lost at 39w4d and twins at 23 weeks, I had also found out that my great grandma had accidentally suffocated her baby falling asleep nursing. And here I am nursing every hour practically. Everything I ever dreamed about would be stolen from me for I was too selfish to sleep and I just knew something that horrendous would happen to me: my track record proved shitty things happen to me. I just HAD to stay awake. I slapped myself in the face, watched anything remotely exciting on tv, wore headphones and blared music, ate and drank to keep busy and awake. I was starting to unravel and spiral but this is what being a new mom is all about, right?

While I was so lucky to have beaten infertility, I had many friends who had not yet done the same. I felt guilty and therefore, felt I better be "super mom". I HAD to be nursing him every time he cried or he'd starve.  Well, really if he cried it was because I was a bad mom. We wouldn't dare go out in public for what if he cried in the car seat while I was driving and couldn't pull over or someone wanted to touch him? Go for a walk? No it might be windy out or cold or the sun might blind him.  I had to hold him all the time cuz if someone else did, he could get sick and then need an automatic spinal tap. (Which our first pediatrician told us among other bat shit crazy things so we left). And if he peed or pooped, I had to change the diaper immediately. I was trapped in my mind.

And since I was a former All-American athlete with a long maternity leave, I better work with him all day long for I had the knowledge and time. I had to do tummy time 60-90 minutes a day and perfectly so he didn't get a misshapen head or torticullis, so I researched exercises and became an honorary PT/OT. I wouldn't put him in any equipment besides a car seat: he was in a swing probably 5 times. The OT/PT blogs shunned exersaucers, bouncers, swings, bumbo chairs, so I did too.

I tried to battle these thoughts unmedicated due to nursing and stopped going therapy due to being overwhelmed and worrying the baby would cry in the literal 3 minute car ride to the office. My therapist did meet him once for a session and then I didn't go back again. Looking back that was dumb of me to stop, but I had what I thought to be no one that understood what was going on. I was the only one of my closest friends with a baby. They were all at work all day long and I was literally alone in my house day and night. My parents would come over for a few hours at night to let me nap, but the second I heard crying, I was up. And to tell my infertile friends the mental anguish I suffered would come across as ungrateful. I would justify that cuz some of them must visit graveyards to see their babies while I'm holding mine. "Don't you dare ever tell anyone you're feeling like you're going crazy" I would tell myself cuz that's what happens to new moms.

I would cry cuz I was off the infertility roller coaster finally, but didn't realize I just traded it in for one with different twists and turns. I was imploding and no one could help me. I was quite alone when it came to my unique situation of infertility and loss. While most people I knew either never got pregnant or got pregnant easily and lost, I was the person who took years to get pregnant naturally, then lose, then do ART and lose again multiple times.

I beat dead horses every time I went to therapy, but it was awesome to feel better after that hour was up. The meds really didn't do much, but I was also exercising to get that dopamine high. I would try to do things to make myself feel better and I did feel great a lot of the time. Closing my eyes to sleep was when maybe my brain had a second to shut down and then the anxiety and intrusive thoughts made their way. When you hear of postpartum mental health issues on the news it's often the moms that have gone into the psychotic part of actually committing heinous crimes. No one talks about it, but I did with a small group of moms the other day and I was comforted to know out of us 4, 3 had struggled. Wow! And I am extremely lucky to have such caring and compassionate friends who are brave enough to share their story with me, for the social stigma surrounding mental health is truly disappointing. Mental health issues pervade every gender, socioeconomic status, race, and religion. I wear my heart on my sleeve and feel compelled to talk about my experiences for it is therapeutic. I am always surprised to learn I am not alone.

So to discover I had post partum anxiety and OCD the other day was a literal light bulb moment. And since I always talk about my experiences, I urge you to take time to be gentle to yourself. Especially you infertile ladies for you are already cracked...and I definitely don't mean that as insulting. I mean it as you have been broken and beat down too many times to think you are invincible once infertility is conquered. Like a black shadow looming in your mind, you unknowingly let those thoughs creep in. Thinking back to those first few weeks, I truly get anxious again. It was so extremely hard. I thought there was nothing that could break me after everything I went through, and boy, did it try. I can say now, 25 months later that I am much better...still healing.
Return to Home
Powered by