Trying to Find a Solution 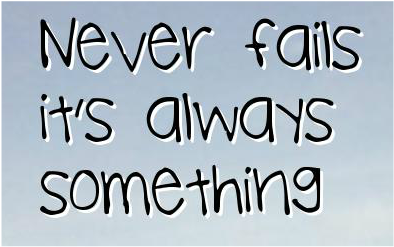 I have continued to use the Mini pill, but since that is giving me 2-3 periods a month, I need a change.

Also with Val, it is difficult to be able to take the pill at exactly the time my alarm goes off.

There are many options for birth control and cycle regulation these days.

Between the arm implant, IUD, and Depo shot, I looked at all the pros and cons.

I listened to people I knew that had these and I decided on the IUD.

There are 2 kinds: hormonal and copper. My OBGYN said that since my periods are heavy, random, and I have prolonged bleeding that a hormonal IUD is the best choice.

I got insurance to approve the Mirena and I just had to wait and call the office when I was ON my period to get it inserted.

I was nervous when I went in for I had heard from some friends it was uncomfortable and/or painful.

Surely, I could do this, but Christ, when it comes to your va-jay-jay, it makes me cringe to think of pain.

Here's what was on the counter when I came in: 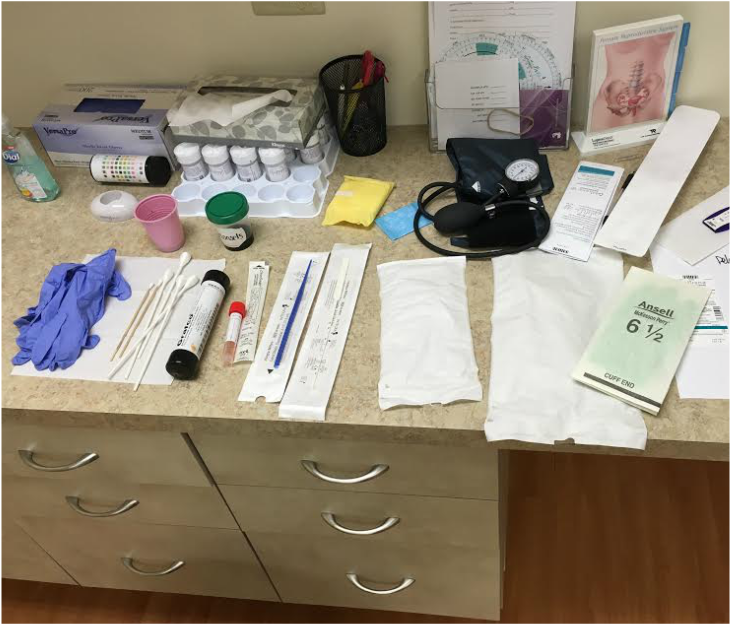 Anyways, I was nervous and this office is awesome so they were making fun of me cuz I went to the bathroom twice before the doctor came in.

I laid back and the speculum was really warm, so I let out a little "Oh! That's hot!" and my nurse and OBGYN apologized and pulled it out to cool off.

She placed it in and had to adjust several times: she mentioned to the nurse that she wanted a smaller speculum.

I just laid there trying to brace myself for "things" getting put in.

Once the new speculum was in, she commented that she saw lots of scar tissue on my cervix....from the LEEP procedure in December. She said that the scar tissue was making the opening to my cervix was very small. She said it was pin hole small.

I didn't think much of it, but she started to pick off the scar tissue and it didn't hurt, but it felt like a huge scab was trying to come off down there.

Then she commented that it wasn't coming off and she tried to open my cervix with a dilator rod. Apparently, the smallest rod was too big!

But then I felt a big cramp that made me bite my lip and put my hands over my mouth. I continued to bite my fingers as a way to combat any "uncomfiness." Yeah, that's not a real word, but you get it.

My OBGYN asked the nurse for a skinny Q-tip, and all the ones she could find were "too big".

She stopped and said it's not going to work.

I asked if I was just not a candidate for it and she explained that I have cervical stenosis. She said the cervix scars up sometimes after LEEP's and I would need to be put under anesthesia to get it inserted.

I was surprised that could even be done!

She mentioned that it would be good for her to biopsy my lining even though I'm not 35, but since I'm 34 and having bad periods.

So she was going to do a D&C as well and can do it next week.

This was more than I bargained for! What the fuck is going on...why does there got to be something going on all the time!

I must admit that I am fine with going under to get va-jay-jay work done, but a D&C?

Just makes me think of when I miscarried and needed them.

But on the other hand, I need to figure out why I am having gushing bleeds!

I signed the paperwork, got my lab sheet, and left. 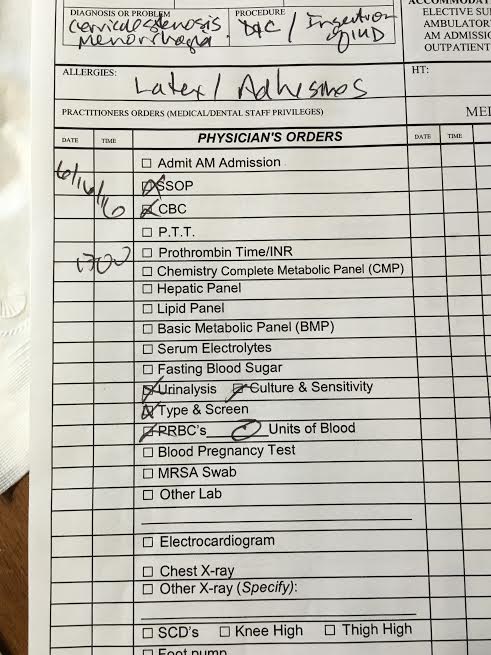 So I get a call the next day from the OBGYN's office that I need to get an ultrasound ASAP.

I call the hospital and of course, they have nothing for like 5 days cuz they are "totally booked". Ummmm, sure.

I call the OBGYN office and ask them to call for me.

They call back and the hospital told them the same thing until my nurse said "STAT". Then miraculously, a 11:00 appointment showed up.

It was 9:30. I was to start the water drinking hell that it is before ultrasounds.

I am going to piss my pants.

I tell the front desk that I have to pee and the woman said just count for 5 seconds.

Once of the front desk ladies apologized to me cuz she saw me running out of the waiting room to go piss.

Then I got paranoid wondering if they were doing this to me on purpose cuz they had to squeeze me in.

I got called back at 11:50. The tech was really nice in apologizing and I explained to her that I had to piss again.

She quickly had me undress to do the abdominal ultrasound.

She was really nice and I got to share my story with her...she was shocked at all the stuff that has happened, but then again, they all are.

I got to pee again before the internal ultrasound.

I asked her to tell me what she saw, but she couldn't. I can usually work out some things from the techs even though they are not allowed to officially tell you shit, but some do.

She told me that my bladder was filling up again, so she stopped so I could go pee again.

Once back, she mentioned that she saw scarring on my lining.

I knew I had some from when I was pregnant, but I guess I thought it would go away? I dunno.

I got done there and still wait for the results.

I go home and about 3 hours later, the OBGYN office is calling me: they want me to go get my bloodwork today as well.

So I go back to the hospital and do it.

Since it is same day surgery out patient, you have to wear an ID band. I always do my bloodwork the day before, this was different doing it 6 days before.

The lab wanted me to wear the ID band all week!

"Okay, well you will have to get it the day of then."

What the fuck do they even ask? Who in the hell would were an ID band that you can't get wet for almost a week?
Post Partum Anxiety and OCD
Powered by