﻿One year ago, we were transferring in a tiny normal embryo...this year I am getting another surgery 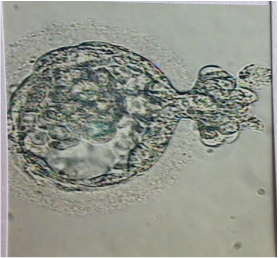 I wanted to give up because I fucking KNEW none would be normal. I had 1 more embryo waiting to divide and 1 left over frozen.

4 embryos ended up being sent out.... and 1 normal one...embryo #1 too. Grade AA hatching blastocyst.

I transferred Val on December 10th...my husband's birthday. I held my breath every day until December 23rd. I opted not to get the phone call for the beta because it was the last day of school and everyone was happy and ready for Christmas.

I just didn't want to cry at school when the news could be shitty. I knew if they called and left a voicemail, I just couldn't NOT call back.

I opted for Shady Grove to call my husband instead.

And I told him to not tell me until I came into the house. And he told me that the lab didn't send the results to Shady Grove.

First thing I said "Those motherfuckers!!" and I stomped off saying "Did they end up sending it?"

Of course, that was all a lie and they did send the results and I was pregnant.

Talking with different new mom friends it's interesting to hear and see so much that makes you different.

I know not everything is black and white, but I do have some strong opinions on stuff.

You don't really feel like you do until you're chatting with people who do what you don't do. lol

If you have strong opinions and get questioned by family or friends about them, my suggestion is just to state why you feel that way. Don't try to change their opinion if it's the opposite.

The areas of gray are everywhere...I look towards a balanced approach at some things.

Here's some things I have firm feelings towards:
Things I'm more neutral on:

I had my pap done again in November because last year it came back as abnormal: HGSIL (high grade) and it was recommended I do a colposcopy, but since the transfer was on December 10th, my OB/GYN said I could wait until after the pregnancy to see if things had changed.

Well they did, but not in a good way really.

I got a call that the pap was showing a high grade squamous intraepithelial lesion (HGSIL) and I need a colposcopy in January to check what is going on with that tissue in there.

The colposcopy is done in the office without any numbing or anesthesia. Ughhhhhhhhhh

I will be getting in done on December 9. I can take up to 800mg of Motrin an hour before.

Cutting out parts from my cervix is gonna be soooooooooo painful!!!

If the sampling comes back as abnormal still, I would need to either get the area frozen or cut out more with a LEEP procedure.

My sister had a colposcopy done and she said it was painful but not crazy painful. My friends that are twins both needed to have a LEEP or cryo to get the abnormal tissue removed.

All of them since haven't had any problems with it being abnormal again and get pap smears more often.

Like I always say, ask your doctor's to provide you with the lab results so you can have it in your own hands. 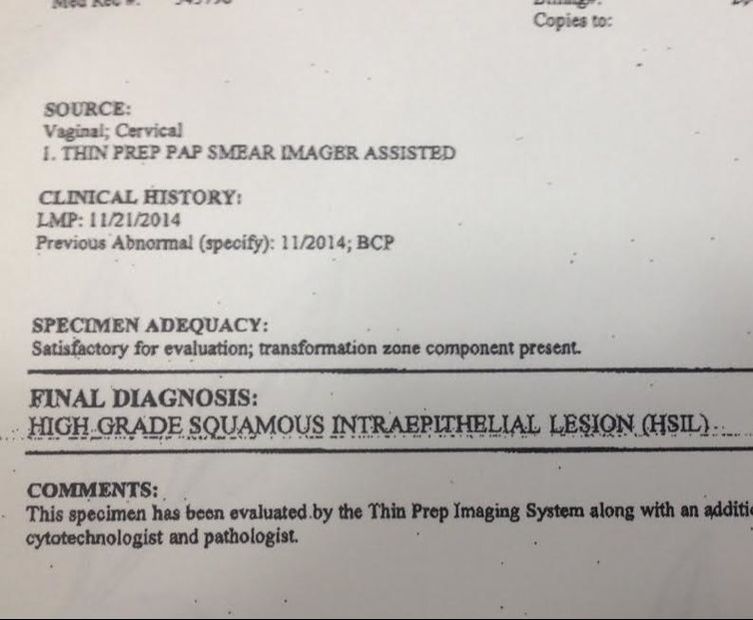 Written on the sheet are "need copo" and "need HPV typography".

So I was extremely nervous for this colposcopy because it was not going to be under anesthesia.

Once in the exam room, I saw all these things out on the counter on on a side table.

My OB-GYN came in and said that this was awful compared to the LEEP. She explained that 90% of women need a LEEP after the results come back.

If they come back as CIN 2 or 3, I will be put under anesthesia for the LEEP.

So, I had to get my feet into the stirrups with her putting the speculum in.

She told me every thing she did because I wanted her too and not be surprised.

She swabbed the inside with saline on a huge Q tip. This didn't hurt.

She took a brush looking thing and scraped inside of the cervix and that felt like she was cleaning it and didn't hurt.

She then put Ferric Subsulfate on the cervix and it was giving her an almost black light shine on the parts that appeared abnormal. She said that the acidic could feel burny, but it just felt cold to me.

She said she saw a Qtip sized area near the opening of the cervix. To her, that is small. I was thining pin prick would be small, but whatever.

She told the nurse that she was going to biopsy 12:00 and 4:00 in relation to where the spots were at. I

I tried to imagine those areas to see if I could feel it when she started.

She then inserted some device that was going to 'bite' out biopsies.

She said to cough and then that would push the cervix out and then she would get the biopsy.

I asked how deep of cough do I need and she said to do a practice one.

I coughed deeply and she said that's fine. I asked if it was okay cuz that made my body move and she said yeah.

So I didn't feel her put the instrument in, but when I coughed, I braced myself for a hell of a lot of pain and it was just discomfort and pressure.

That wasn't so bad!

Then she said she was going to take out another piece the same way.

It felt the same way: pressure and discomfort.

She has to use silver nitrate to make the bleeding stop and she had to move the speculum around.

This is when I felt cramping and that was normal.

She said my one area stopped bleeding quickly and the other one was really bleeding bright red blood.

She had me stay still and she put pressure on that area with more silver nitrate and held it there for at least 5 minutes.

This part was MORE uncomfortable than the 'biting' out parts.

I was going to get brown discharge in my liner and can't bath or have sex for 2 weeks.

The lab will call with the results next week. We planned on me just having a LEEP because that is my damn luck.

I'm going back to work January 4 and then will need to take a day off very shortly after.

They only do surgeries on Fridays at the hospital.

I don't want to get the LEEP because I'm worried about the meds with breastfeeding.

I just knew those biopsied areas would be bad. I FUCKING KNEW IT.

They came back as CIN 2 and I will be getting a LEEP this week or next.

I'm already fretting how I am going to deal with my breasts because typically with surgeries, they want you in the hospital 3 hours before hand.

Then you have the actual surgery, then recovery time!

I nurse Val every 1.5 to 2 hours....and then I was told I could breastfeed once I got home. But I forgot to ask about pumping milk before hand.

I might have to pump milk before then dump it. Ughhhhhhhhhhh what a waste of milk, but I understand he cannot drink it.

I am going to find out more about this.

I go on to get blood work tomorrow and sign consent forms.

Luckily, it will be under general anethesia so I don't feel them! One of my friends had hers done in the doctor's office without being put under!

I was able to breastfeed before leaving the house and brought my electric pump with me. I needed to put around 11:30 before surgery and keep the milk. Then during recovery, I needed to pump and throw out the milk just in case of the meds I was on during anesthesia.

It didn't take long to get prepped: I spent most of the time sitting in a recliner chair watching the Price is Right.

They took my blood and set up an IV of fluids.

I was able to get quiet of a bit of milk out during pumping which was surprisingly for I only breastfeed and rarely pump, so I wasn't expecting to get much. I think I got 4-5 ounces? Not sure.

I didn't bring any storage bottles or bags because my OB-GYN had told me to pump and dump before and after, but what was the sense in doing a dump before when all I had was an IV of fluids?

I paged the nurse and one came back to tell me that she would get me sterile urine sample containers and put my milk in the fridge. She had a 3 month old and said definitely don't pump and dump before, but afterwards.

I had to quickly take my pump off, pee, and then grab my IV bag to get down to the OR.

I was in the same OR as when I had my C-section. It is weird to walk in and see everything! And that room was fucking cold as ice too! So they gave me a warm blanket.
​
In there they strapped down my arms and began with the oxygen mask and before I knew it, I was waking up in the first recovery room.

My OB-GYN talked to me and said she was aggressive with a cone biopsy and got a lot of tissue out. I didn't realize that she was doing the cone, but it makes sense since one of the biopsies was internal in the cervix.

She said I didn't bleed a lot either.

She said that when the lab results come back soon, it will most like show CIN 2-3 again and that just means I will need to get a repeat pap in 3-4 months.

The lab will also be able to tell if she got it all and if the abnormality was within the margins.

UPDATE: My OB's nurse called and said the lab results were negative for CIN 2-3 or any cancer! Awesome! No need to get a repeat pap sooner than 1 year!

No sex for 4-6 weeks. I haven't gotten my period yet, but if I did, it would be no tampons or douche.

Once to the other recovery room and out of the hospital bed, around 2:20 pm. I pumped again and then threw the milk down the drain. I didn't get much milk.
Return to Home
Powered by