Due Date and IUI...what a month!

Well...I had my baseline ultrasound on April 4th, CD4 and there weren't any cysts. Good news!

I was starting double Clomid 100mg on CD5.

However, I knew that this weekend was my due date. I was due with the little girl on Sunday, April 7, 2013.

I had been doing well dealing with it, but I just felt that date looming on.

As you could guess, I was a MESS that day.

I just couldn't get over the fact that I could've been taking care of a baby. I spent most of the day crying and talking to myself. When I get depressed, I swear and talk to myself. Basically, I snowball pretty quickly. 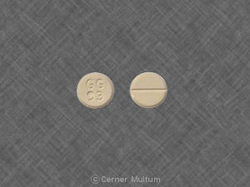 I did end up taking 2 anti-anxiety Rx pills: Ativan (lorazepam).  I was prescribed them by my psychiatrist and hadn't used them much for I was experiencing depression and anxiety.

I think there is a stigma with mental health and how if you try to get help, you are weak. The opposite is true: those that can recognize they need help and seek out professionals are strong and intelligent people.

There is nothing admirable about suffering in silence when you know there are professionals who are educated in coping skills and can teach them to you.

I still go to a counselor twice a month. I started in September. I realized that my sadness and replaying in my mind was destructive to my current life and relationships. I was okay at work, but at home, I was miserable.

When you have a miscarriage, YOU DO NOT GET OVER IT.

I don't care what people say or tell you! If they haven't had one, they tell them to STFU! (Shut the F*** Up)

I did feel better after I took them. I turned on some reality tv and sat there without thinking about anything.

If you are curious about getting on meds or counseling services, please contact your nearest mental health provider. You will be glad you did. It REALLY helps to talk to non-biased person. 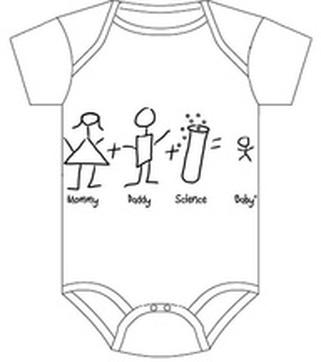 I did feel better after April 7th passed. I wasn't like I had forgotten what could've been, but it was as though I had passed forward. I think that date stuck me in the negative, whereas April 8th and on moved forward?

Back to this IUI cycle: I was to have my midcyle folly check on CD13.

This ultrasound went great: to quote the ultrasound tech:
"Beautiful lining!" "Beautiful follicles on both sides!"

The doctor called and told me that I had one mature egg on each ovary. He did add that that did not mean twins. I told him that if I had twins, I would be so happy! Seriously though! 2 babies on my 5'11" muscular frame...I'm not scared or worried! (Of course, that is what I say now)

Anyways, he said to give myself the Ovirdrel HCG trigger shot at 10:00 pm on Saturday CD13. 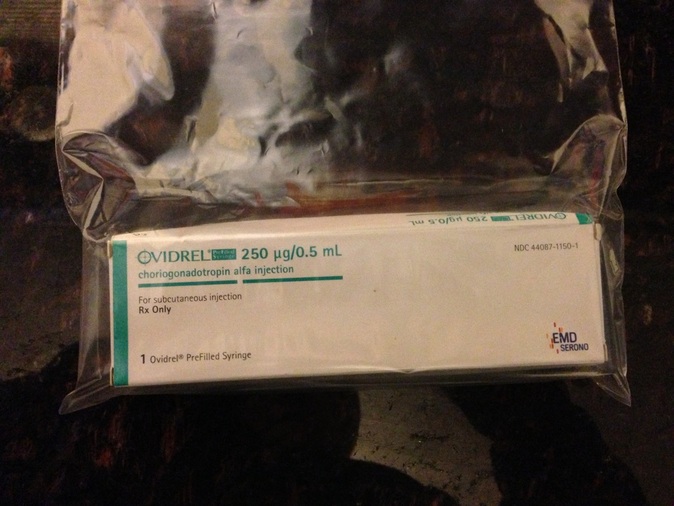 Click on the photo to go to a website about Ovidrel.
I got this HCG trigger shot called into Walgreens delivery.

It cost $107.91. Of course, insurance needs a pre-authorization, but you don't get one since it takes several days and besides, my insurance doesn't cover it.

It came in 2 days shipped in a refrigerated box.

I put it into the fridge immediately, but it could've lasted in that box. 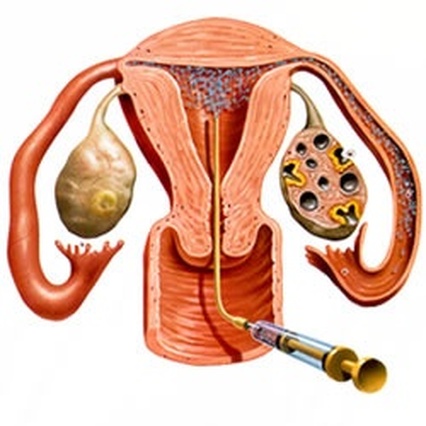 Click on the photo to learn about IUIs.
I didn't have any issues with giving myself the Ovidrel shot. I was kinda scared, but figured out how to give a sub-cutaneous injection from watching several videos online.

My husband was going to go in at 8:00 on Monday morning CD15 and give his sample.

I was nervous...but more nervous was my husband. He was terrified that I was going to be mad if he had a low count or poor motility.

I had to reassure him that I was going to be alright with him no matter what. He was helping everything out awesomely.

He came back from his appointment and said everything went well.

I was nervous as I went in at 11:00.  I came back into the exam room and the head nurse show me the catheter with our names on it and then told me to lie back.

After the speculum was inserted, she asked me about my weekend. We chatted for about 15 seconds and then she said "Okay, lay here like this for 10 minutes. Come out when you're done." She put my feet out of the stirrups and onto the table. She asked me if I wanted my phone.

I asked if I had to watch what I did all day long or if we could have intercourse She said "You can do whatever you want! Just come in 2 weeks from today for a blood test if you don't get your period."

Seriously! It was painless! Nothing like that last HSG test. I felt nothing.

I played on my phone for about 15 minutes. Then I got dressed and left! 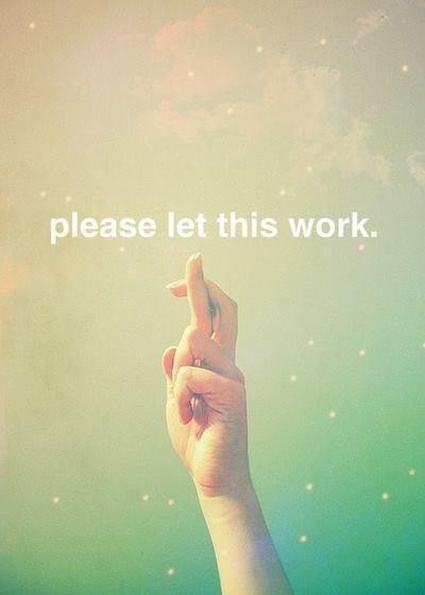 To quote here: "Your period should be starting soon."

I still can go in for my beta on April 30th, but what is the use?

The only thing I might think is that I tested too early? I asked her and she said it could be, but told me 'not to over-think it."

Well, I have to over-think it! That's what we as women do with EVERYTHING, let alone TTC.

When I recorded the HCG shot on Saturday, CD13, Fertility Friend told me to manually put in ovulation. I figured it would be CD15 on the day of my IUI. I took my shot at 10:00 pm on CD13 and thought the HCG shot would go for up to 36 hours, which would match my 11:00 IUI time.

But when I put took the manual override off, my temps calculated on CD16 for ovulation. So I would've had my progesterone done on 4dpIUI which is too early.

How much further would've it have risen? Above 15? I had this 2 week wait and all this crap.

When is something going to finally work out for us? I hate this spending of money and getting on meds and going crazy!

Currently, I'm on 13dpIUI and still have all BFNs. I have like 15 Wondfro tests that will expire by the end of the month, and of course, I'm using them. With a P4 level of 5.6, I'm definitely out this cycle.

I'm scheduled to start my period on April 30th. Ughhhhhhh 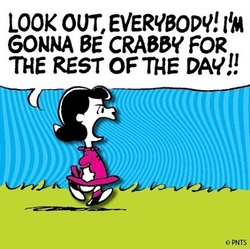 So...I'm not afraid to admit that I sought professional help in the past. I began seeing a therapist in September after the miscarriage. Previously, a few years ago, I struggled with understanding my hips issues and infertility, so I saw a therapist then too.

You are NOT weak if you choose to see professional help! I think there's a bi stigma with mental health that people assume only 'crazy' people need it. Is it admirable to go about life feeling depressed, anxious, etc? No, it's not!

The decision to go on anti-anxiety med Ativan was with a visit to the psychiatrist. School was very difficult this year and to add on a miscarriage and recent surgery was too much.

I took the Ativan in the morning before work. It made me feel calmer. When I took it at night, I got very drowsy and usually napped or went to bed early. My doctor and I decided that although I struggled with depression too, he wanted to try the least restrictive route with taking Ativan whenever I felt anxious. Anti-depressants must be taken everyday.

It was after getting my P4 results this month that I went into a super temper tantrum. I knew that I needed something else. I barely used the Ativan, but my moody was increasingly more consistent in being sullen and depressed.

He agreed that it was time to start Prozac. I would start with 10 mg for 2 weeks and then switch to 20mg every morning. He said that Prozac is one of the most researched medicines with women and pregnancy. He also told me that he has many patients who are infertile and once they get their anxiety and depression under control, they are able to either get pregnant or at least function much more effectively in life.

I understand that there is no cure all for infertility pain. I do however, feel a million times better being on Prozac. I intend on getting off it once I'm pregnant. Although, he said I could still be on it while pregnant. He said that once you stop Prozac, your body tapers it off rather than you having to cut pills in half.

If you are struggling with your mental health while dealing with surgeries or infertility, I HIGHLY recommend talk therapy first and then medication. It's not going to be easy, but making the decision with professionals who are trained and knowledgeable in coping skills is the right to go! There is nothing admirable with 'dealing with it' or suffering!
May 2013
Powered by